RFEM uses the finite element method based on the updated Lagrangian formulation and the displacement formulation.

Nature is nonlinear. Although we often look to simplify the world around us, with the increase of hardware capacity and software improvements in the last decades the linearization of real life engineering problems is not always necessary. RFEM offers a huge variety of nonlinear models covering many areas of use.

In order to achieve maximum computational efficiency, calculation is parallelized on different levels – the direct Cholesky linear solver is parallelized by parallel elimination of matrix rows, the dynamic relaxation method is parallelized through its natural explicit definition. Many other blocks are also parallelized (local element matrix assembly or beam cross-sectional mesh generation).

The types of deformation analysis available in RFEM can be divided into:

Nonlinearities in RFEM can be divided into the following:

The large deformation theory and post-critical analysis differ only in the nonlinear methods used. The latter choice allows the calculation of post-critical behavior of a structure which goes through a singular point, i.e., where the stiffness matrix becomes singular. For a detailed description of the nonlinear methods, see section Nonlinear Solvers below. In case of the large deformation theory, the axial strain is computed with respect to the actual and not reference length, as in the first-order theory. Under a sufficient number of load steps, the axial strain numerically tends to a logarithmic strain definition. In case of beams computed under the large deformation theory, the axial stiffness is computed directly according to the logarithmic strain definition, which gets precise results with one load increment only.

The linear solvers available in RFEM are:

The first method is faster except for large positions, where the iterative approach can be less time demanding. The iterative linear solver, on the other hand, can be easier parallelized. The choice between the nonlinear and the linear solver is up to the user.

The Newton–Raphson nonlinear method is preferred in case of a continuous right-hand side. In case of discontinuities, the Picard method can be used (especially in combination with the Newton–Raphson as a corrector) as a more robust choice. The post-critical behavior, where the solver has to overcome limit points with singular stiffness matrices, is either solved by the modified Newton–Raphson or by the dynamic relaxation method.

In this method, the tangential stiffness matrix is calculated as a function of the current deformation state and inverted in every iteration cycle. In the majority of cases, the method features a fast (quadratic) convergence.

This method is also known as the fixed-point iteration method. It can be thought of as a finite-difference approximation of the Newton method. The difference is considered between the current iteration cycle and the initial iteration cycle in the current load step. The method does not converge as quickly as Newton's method in general, but it can be more robust for some nonlinear problems.

The analysis starts as the Picard method and then switches to the Newton method. The idea behind this is to use the robust method far from equilibrium and the fast convergent method near equilibrium. The first n percent of iterations, for which the Picard method is used, are set in the Calculation Parameters dialog box.

The method is used for post-critical analysis, that is, for problems in which a region of instability has to be overcome to solve the problem. In the case of instability, where the stiffness matrix cannot be inverted, the stiffness matrix from the last stable iteration step is used. This matrix is used until the stability region is reached again. The methods enables the handling of decay diagrams: 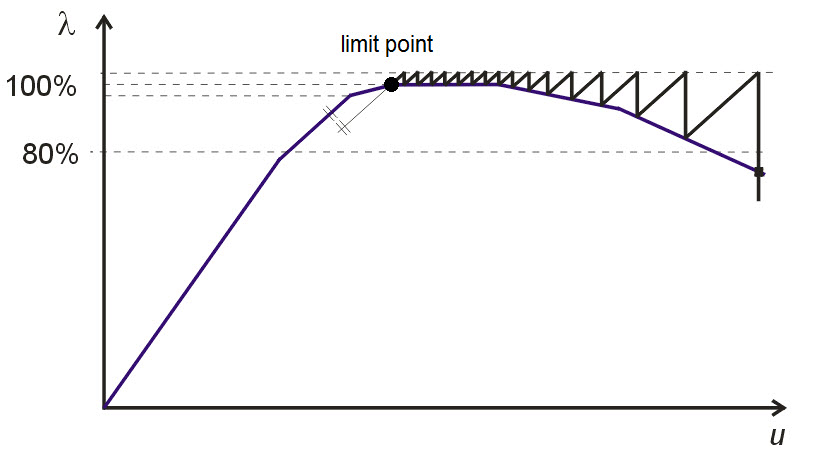 This method is used for large deformation and post-critical. In this method, an artificial time parameter is introduced. Considering inertia and damping, the problem is treated as a dynamic one, using the explicit time integration method. The stiffness matrix is never inverted in this approach. The method also contains Rayleigh damping, which can be set by constants alpha, beta according to the formula:

where M is the lumped (diagonal) mass matrix, C is the diagonal damping matrix, K is the stiffness matrix, dependent on the solution u in the nonlinear case, f is the vector of external forces, u is the discretized displacement and rotation vector, n is the dimension of u.

Forced vibrations choice can further include the following loadings

The response spectra method is among others used for seismic analysis. It has two possibilities:

Time history analysis is either computed by:

The superposition rule is either square root of the sum of the squares (SRSS) or complete quadratic combination (CQC). The direct integration method is based on the implicit Newmark method, which is second order accurate in time and absolutely stable. The Newmark method uses a constant time step approach.

The following types of mass matrix definition are available

For the linear eigenvalue analysis four methods are available:

In RFEM the following types of members can be computed:

A large database of cross-sections is available in RFEM. Hybrid beams, which allow more than one material for the cross-section, are also supported. Each beam can be further equipped by a release (= hinge, in general nonlinear) on each side.

Two types of plate theories, with respect to the transversal shear approximation, can be selected:

The types of surfaces / plates in RFEM:

Note, that curved surfaces in RFEM are approximated by planar finite elements. In nodes where planar elements are joined, deformations and rotations are forced to be equal. This approximation converges with a finer mesh to exact values on curved surfaces.

Loads in RFEM can be defined in many different ways:

Two types of releases are available in RFEM:

A release (= hinge) between two nodes allows the connection of any degree of freedom (ux, uy, uz, fix, fiy, fiz), allows the definition of linear stiffness between any degree of freedom, and is also equipped with nonlinearities: nonlinear hinge behavior defined by a multilinear diagram, partial activity behavior and fixed-under-condition behavior (fixed, if My is positive, for example). A special possibility is a scissor release. With a scissor release, you can model crossing beams. For example, there are four members connected at one node. Each of the two member pairs transfers moments in its continuous direction, but they do not transfer any moments to the other pair. Only axial and shear forces are transferred in the node. A line release in RFEM allows linear behaviour only.

RFEM contains an extensive database of materials from various technical standards and company specifications (steel, concrete, glass, foils, wood). Special materials available in RFEM are gasses (in RFEM solved using solid elements, see the description of finite elements used in RFEM below) and materials with temperature dependent properties. From the modelling point of view, all materials can be modelled using different material models:

In practice it is often necessary to model materials which have different yield limits in tension and in compression. The material models which can handle these effects are the following:

Isotropic hardening is implemented in all of the above mentioned material models. The latter three models (Orthotropic Plastic 2D, Orthotropic Plastic 3D and Isotropic Masonry 2D) allow the definition of bilinear hardening, all other nonlinear material models allow the definition of multilinear hardening, defined by a diagram). Kinematic hardening is not available. Another feature is the calculation of cables (special type of member) and membranes (special type of surface), which have no bending and compression stiffness. The calculation process lowers the stiffness in compression, which makes the calculation nonlinear. Large deflection theory (third order theory) is necessary to be used in that case.

The following construction models can be selected:

Second-order analysis is on the half way between the first-order theory (small deformation theory) and the large deformation analysis. The small deformation theory is calculated in the undeformed configuration, the resulting equations are linear and therefore no iterations are needed. The large deformation analysis, on the other hand, is calculated in the deformed configuration, which is updated in each iteration. The resulting equations are therefore nonlinear. As part of the large deformation theory, the effect of axial forces on the bending stiffness is considered (the so-called P-delta/P-Delta effect). Tensile forces increase the bending stiffness, compressive forces decrease the bending stiffness. The second-order analysis is calculated in the undeformed configuration, however, the effect of axial forces on the bending stiffness is considered. If axial forces are supposed to be known, then the problem is linear and can be therefore solved within one iteration. If axial forces are unknown, which is the usual case, the problem is solved iteratively as a sequence of linear problems, in which the axial force is updated from the previous iteration and considered constant within the particular iteration step. This numerical approach is in fact the fixed-point iteration method, in RFEM called equivalently the Picard method. The Newton method is not available for this type of analysis [1]. Let us clarify the second-order analysis on the beam equation (see Petersen, Statik und Stabilität der Baukonstruktionen, 1982, p.187)

where w(x) is the beam transversal deflection, N is the axial force (N > 0 means tensional force), E is Young's modulus, Iy is the bending moment of inertia and q(x) is the pressure load. We easily see that by considering the axial force N constant, the equation is linear. If the axial force N is zero, then the equation (1.4) reduces to the standard Euler–Bernoulli beam equation. In RFEM the second-order theory is available not only for beams, but also for plates and solids.

[1] The Newton method could be used in general. This would require to express the axial force N in terms of unknown deflections
and rotations, the resulting equations would be nonlinear. However, this approach is not used in RFEM.